The following is an excerpt from an article I wrote on Benjamin Disraeli for The Chap Magazine:

...Byron famously said that the most important men of his generation were Beau Brummell, himself, and Napoleon. If ever there was a man who embodied this trinity, it was Benjamin Disraeli, who achieved success first as dandy, then author, then politician.

Disraeli’s friendship with the famous dandy Count d'Orsay was his first step on the social ladder: “D'Orsay attacked me yesterday in Bond St. attired with a splendor I cannot describe, so dishevelled were his curls, so brilliant his bijouteries and the shifting tints of his party-colored costume. He knows who I am.” He boasted: “I've become this year very popular with the dandies. D'Orsay took a fancy to me, and they take their tone from him... I'm as popular with first-rate men as I'm hated by the second.”
He was soon quaffing claret and exchanging bon mots with the fashionable few, having affairs with married women, and dazzling London with his showy costumes and exotic Jewish looks. He wore velvet trousers and jackets, shirts with ruffles, flashy colored waistcoats, and glittering jewelry, including gold chains strung across his chest. He was famous for his perfect jet-black curls, particularly his dramatic forelock, one of the few pieces of his hair to stay with him to the end. One man remembered him thusly:
"There was something irresistibly comic in the young man dressed in the fantastic, coxcombical costume he then affected – velvet coat of an original cut thrown wide open, and ruffles to its sleeves, shirt collars turned down in Byronic fashion, an elaborately embroidered waistcoat whence issued voluminous folds of frill, and shoes adorned with red rosettes – his black hair pomatumed and elaborately curled, and his person redolent of perfume..." 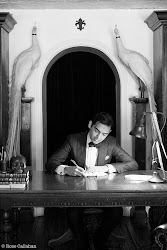 Nathaniel "Natty" Adams
Nathaniel Adams is a New York-based writer who has been spending the past several years researching and writing a book about historical dandies. He is also the manager of the Against Nature atelier in New York City.